In Products I Use, Recipes

Prior to about 4 years ago, I had never eaten kale, and, to be honest, I didn’t even know what it was. I had no idea that the leafy green garnishes I had seen at buffets or the “leaves” on Edible Arrangements were none other than…kale! 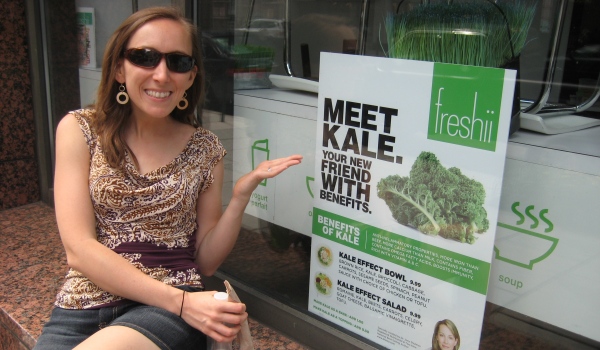 Saw this sign on a walk and DC and had to take a picture. It’s so true!

Kale is an absolute nutritional powerhouse. It scores a whopping 1,000 points on the ANDI scale, which stands for “Aggregate Nutrient Density Index,” a scoring system that rates foods on a scale from 1 to 1,000 based on nutrient content. To give some context, blueberries (another super healthy food) receive a score of 132. Kale is cancer fighting, anti-inflammatory, detoxifying, and loaded with bone-building and brain-boosting nutrients. This leafy green is definitely a standout!

We use kale in everything from smoothies and salads to soups, stir-fries and sautees. It is super versatile and a great way to pack a nutritional punch at any meal. It’s also one of the “Dirty Dozen” veggies that is most likely to be contaminated with harmful pesticides, so it’s important to buy it organic.

A Christmas gift from my dad – 50 Shade of Kale cookbook!

A few years ago, I befriended two holistic health coaches, who were trained by the health coaching program I recently completed and were a big part of the reason I pursued it. They introduced me to their delicious 5-flavor kale salad…one that has now become my absolute favorite and a staple in our house!

I bring this salad to potlucks and parties and enjoy it probably once a week for dinner. It’s the way that I introduce friends, family and clients to kale when they’ve never had it before. I haven’t had anyone turn it down yet, and it’s now my dad’s favorite, go-to salad, too. He raves about it!

This site uses Akismet to reduce spam. Learn how your comment data is processed.